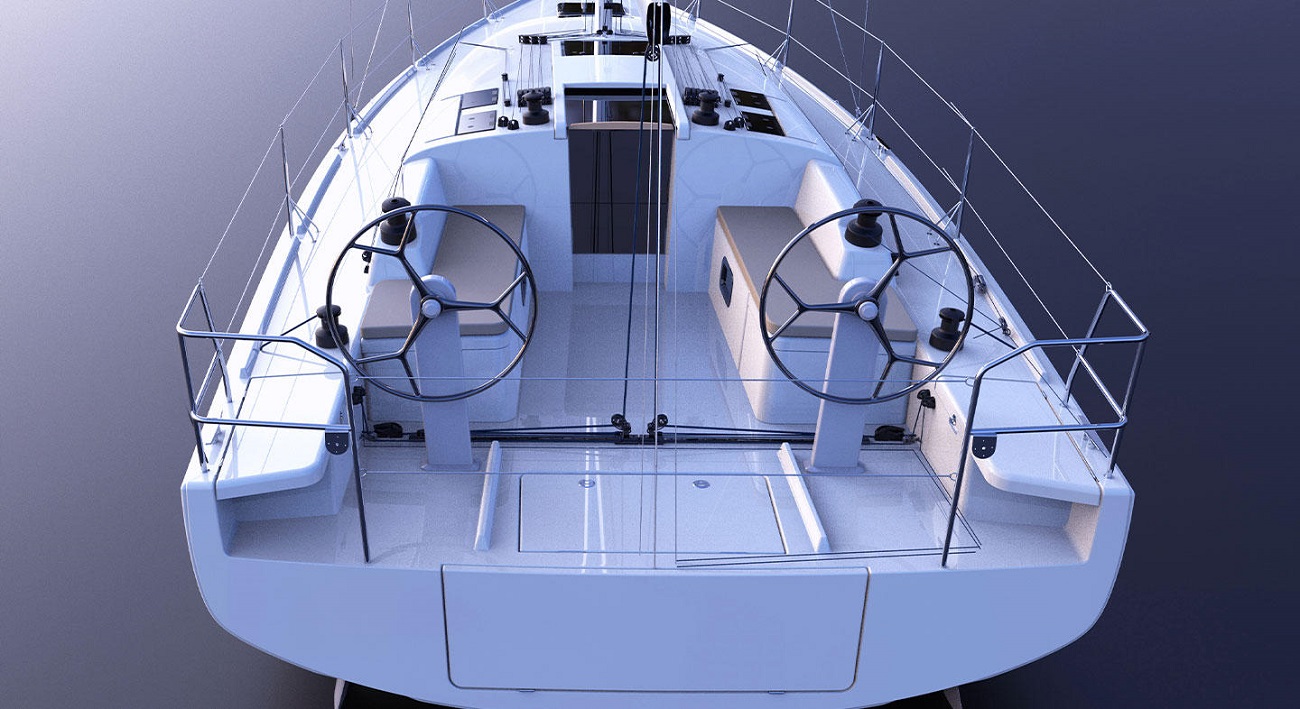 The world premiere of Beneteau’s brand new First 36 will take place at the Düsseldorf Boat Show in January 2022.

The all new Beneteau First 36 represents something of a back-to-the-future moment for the French marque with IMOCA60 designer, Sam Manuard providing a sporty little performer.

This Sam Manuard design is arguably one of Beneteau’s most important new models for years. The company’s First range used to dominate the performance cruiser/racer market. These were fast, yet well mannered, boats that offered surprisingly civilised accommodation and the Beneteau First 36 is the first we have seen of this style boat from Beneteau in some years.

The past decade has seen the design of raceboats and cruisers diverging across the board and Beneteau focussed on the needs of cruisers who demanded ever more accommodation volume and home comforts.

Nevertheless smaller French yards, such as Pogo and RM Yachts, have demonstrated a latent demand for cruisers with a very high level of performance. Beneteau’s return to the 30-40ft sector with the first new First model in this size range for almost a decade and a half has therefore been welcomed by many.

However, this boat was not conceived in France – it was already being developed by Seascape when the Slovenian company partnered with Beneteau in 2018.

At the same time, mass appeal was a key factor that informed the design. The priorities of both Beneteau and the Slovenian team are closely aligned in this respect. “We try to change the mainstream of sailing,” Seascape founder Andraz Mihelin told me. “We don’t want to just serve niche sailing enthusiasts and with this boat we want to set the bar higher for everyone.”

Taking performance first, the boat is intended as a fast cruiser and club racer, so all-round ability is important. “That means the boat has to be quick on (upwind and running) VMG courses, otherwise you suffer in 50 per cent of the time,” Mihelin says.

Yet early planing is still a key part of the attraction – the Beneteau First 36 is designed to achieve 10 knots of boat speed in only 12-13 knots of true wind. To achieve this it’s essential to keep displacement within the designer’s figures. Yet legions of boat builders in the past have failed to achieve this, with the result that plenty of promising designs have failed to deliver.

How can we be sure this boat will not meet the same fate? “The difference lies in how well the boat is engineered and built,” says Mihelin. “We’ve put 70 per cent of our effort into that quarter – the stuff that you never see because it’s hidden.”

Pure Design and Engineering, the New Zealand company headed by legendary structural engineer Giovanni Belgrano, was tasked with this aspect of the project. Mihelin says having confidence in precise specifications and scantlings for every element of the build has been key to keeping weight to a minimum, while ensuring strength and stiffness are not compromised.

This applies as much to smaller components as to the main structure. All bulkheads and furniture are made of infused foam sandwich panels, just as they would be for a raceboat, even the bathing platform gets this treatment – it’s made of Nomex sandwich and weighs only 4.5kg.

However, the comfort factor hasn’t been forgotten on the Beneteau First 36 – there’s plenty of wood trim to give the saloon a comfortable and cosy appeal. And the wide beam and long waterline makes this a supremely spacious 36-footer by any standards, although headroom is not as generous as on most of today’s pure cruisers. The lack of chines in the topsides will be a surprise to many.

However, designer Sam Manuard says that, although they are a necessity for designs where maximum beam is limited (as is the case with Mini 650s, Class 40s and IMOCA 60s), when maximum beam isn’t constrained a hull without hard-edged chines has less drag.

Given the original launch of this model was delayed significantly after Seascape joined forces with Beneteau, I also asked Manuard whether he would have drawn a different shape if he was designing the boat today. “The design specification hasn’t changed,” he replied, “so there’s no advantage in changing the hull shape. The boat already has quite a lot of volume forward, but a scow bow would not be appropriate – we wanted a fast all-rounder, but not a design that would be extreme in any way.”

The First 36 will be built in a new facility in Slovenia. Only 25 boats are scheduled for delivery in the first 12 months of production, but output is expected to ramp up significantly after that.

Initially it will only be available with twin wheels, which seems a shame. They are an unnecessary complication on a boat like this, while tillers take up less space and facilitate short-handed sailing.

The world premiere will be at the Dusseldorf boat show in January 2022.